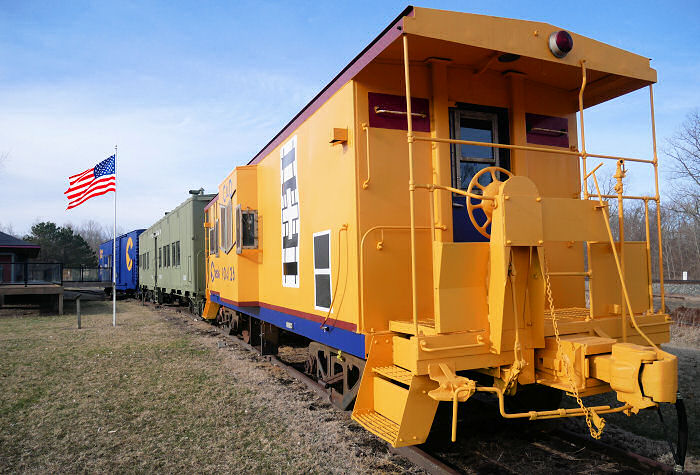 The NEW BUFFALO RAILROAD MUSEUM – “The Little Museum That Could”  packs a great experience into a compact space, just across the train yard from the former Pere Marquette railway roundhouse steam locomotive facility. The museum is a celebration of New Buffalo’s railway history and the quality of life in small-town America.

Most of the items in the museum have been donated or loaned by area residents. Many of these people, or their ancestors, worked in New Buffalo for the Pere Marquette Railroad, which eventually became the Chesapeake & Ohio and, finally, CSX. According to rumors, it is rare to find a family in New Buffalo without at least one railroader.

To illustrate the history of the greater New Buffalo area and in particular to highlight the role the railroad played in its development, our permanent collection is comprised of the following exhibits and artifacts: 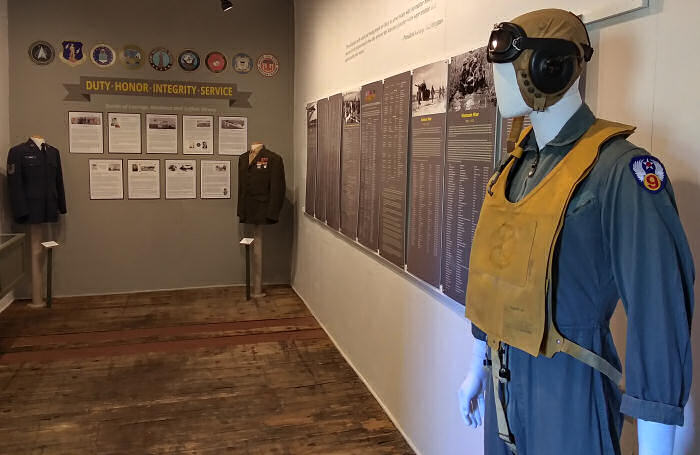 We pay tribute to the men and women who have served in the uniformed services and have a connection to New Buffalo, Michigan – living, working, or attending New Buffalo Area Schools.

This newly created exhibit borrows from the original veterans’ honor roll listing prepared by the late Shirley Paloucek, Janet Hayes, the late George Slechta, and Nadra and Al Kissman. Additional names were added by Marg Zientarski Putzke and Jim Smitchger. Jim, a 30-year military veteran designed and built the exhibit with the assistance of his oldest son, Minas.

In addition to extensive and detailed listings of New Buffalo area veterans, there are military artifacts, personal stories, and uniform items on display.

Replica of the Pere Marquette Railroad Depot
The Museum is housed in a replica of the original Pere Marquette Depot that existed near the site in the 1920s. The original plans were discovered by life-long New Buffalo area residents Nadra and Al Kissman and Ron and Rol Oselka and the building was built from those original blueprints.

Acquiring a Caboose has long been a goal of the Museum. Our authentic bright yellow C&O Caboose is the cap on our collection. Most individuals never have the opportunity to actually go inside a railroad car other than a passenger train or mass transit.

See how our soldiers, sailors, marines, and airman traveled during WWII. Between December 1941 and June 1945 U.S. railroads carried almost 44 million armed services personnel. As there were not enough cars and coaches available to meet the massive need for troop transit created by World War II, in late 1943 the U.S. Office of Defense Transportation contracted with the Pullman Company to build 2,400 troop sleepers.

A troop sleeper car was a railroad passenger car that had been constructed to serve as something of a mobile barracks for transporting troops over distances sufficient to require overnight accommodations. This method allowed part of the trip to be made overnight, reducing the amount of transit time required and increasing travel efficiency.

HO Scale Model train layout
This interactive display features an HO scale train layout which shows visitors how the village of New Buffalo may have appeared in the 1920s. Depicted are the train yard, roundhouse, turntable locomotive facility, Hobo Village, the Pelican Pond into which boiler wash was disposed of, the Quonset Hut, which is now Oink’s Ice Cream, Whittaker Street (not to scale), and the surrounding neighborhood. Maintained by the Dunes Model Railroad Club, it demonstrates how important the Railroad was, not only to New Buffalo but to the entire region.

Where did that come from?

Did you know 99% of the wondrous artifacts in the museum are donated or funded by caring individuals, just like you? The museum is a non-profit organization that is able to open its doors each day to visitors- free of admission because of these benefactors. Of course, there are a few items that would enhance the museum’s ability to tell a better story or enrich our visitor’s experience that we would like to add to our collections. Please consider giving a monetary gift on our museum website Donations page or if you are in the possession of an item on our wish list, please consider contributing or bequeathing the piece to our museum for all to share!