Established in 1989, the NEW BUFFALO RAILROAD MUSEUM provides an historical record of the history of the area highlighting the significant role the railroad played in the development of the greater New Buffalo community. The Museum was built as part of the development and renovation of the vacated Pere Marquette Railroad Roundhouse property located on South Whittaker Street.

In the 1920s, the Pere Marquette Roundhouse was a major terminus connecting the rich trade area of Northern Michigan with the Chicago mercantile and shipping markets and served as the major employer for the residents of the New Buffalo area. The Pere Marquette Railroad later became the Chesapeake & Ohio line, and now the CSX line. The Museum building is a replica of the original Pere Marquette Depot that existed near the site in the 1920s, when steam locomotives ruled the rails. The original plans were discovered by life-long New Buffalo area residents Nadra and Al Kissman and Ron and Rol Oselka and the building was built from those original blueprints by Alvin R. Kissman, Dave Ohms and George Slechta.

Over the years, the Museum has played host to a variety of community events and services. Children’s activities were added to delight people of all ages. Thousands of visitors have enjoyed visiting the Museum and seeing its many exhibits and artifacts.

The programs, activities and daily operations of the Museum are under the guidance of the Board of Directors.

Museum Board of Directors

The New Buffalo Railroad Museum is an all-volunteer organization. Each board member takes on a “working” role in addition to their governance responsibilities in order to ensure that any activity of the Museum is successful. 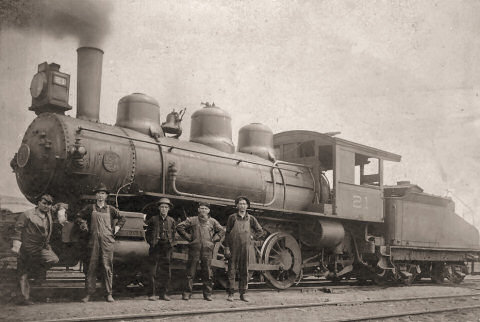 New Buffalo was once a significant engine terminal on the Pere Marquette (PM) Railroad. Westbound trains would stop to refuel and top off their water tanks en route to Chicago. This was their last chance before leaving their own track line which changed over roughly 20 miles to the southwest. When you consider a steam locomotive of the day consuming one ton of coal for every twelve miles and 150 gallons of water per mile having stores of coal and water at convenient locations was the life blood of railroads.

New Buffalo was also the point where the PM branch from LaCrosse, Indiana joined the Chicago-Grand Rapids mainline.

In 1947 the Pere Marquette Railway of Michigan and Ontario merged with Chesapeake & Ohio Line.

Many of the Pere Marquette’s steam locomotives like the one pictured here spent their last days on the dead line at New Buffalo before being hauled away to be cut down to scrap.

The rail yard in New Buffalo ceased operations train operations in 1984. Much of the yard’s equipment was scrapped. The 90-foot turntable at the locomotive facility (roundhouse) was removed and relocated to Owosso for use at the Michigan State Trust for Railway Preservation’s Steam Railroading Institute.

Photo: Railroading in New Buffalo was often a family effort. The photo shows men working in the New Buffalo train around 1940. Two of those pictured are father and son: Harvey Paddock (right) and his son Russell (left).